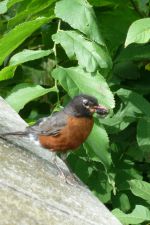 This summer we went to Ontario and Quebec. We flew from Frankfurt to Toronto, then we went to Niagara Falls, along Lake Ontario to Kingston, Montreal, further east to St. Siméon, back to Quebec City, Ottawa, Peterborough and Toronto. We exchanged our hired car for a motorhome and went to Algonquin Park and Georgian Bay. The weather was (almost) perfect, the people very friendly and helpful (at least in Ontario) and the scenery very often breathtaking. Have a look at our impressions!

Here are some words that I find interesting. Often they refer to things or phenomena you might find elsewhere but have a special meaning in Canada. To understand the meaning of the word "collector" ("Sammelspur") in Toronto you have to use one of the huge highways with their subdivisions.

Animals are always special in a country like Canada. One evening the children saw a "woodchuck" (Waldmurmeltier). I'm quite sure we don't have those in Germany. And of course there were lots of "chipmunks" (Backenhörnchen) and "squirrels" (Eichhörnchen).

In Algonquin we learnt what a "snapping turtle" (Schnappschildkröte) looks like and that it can bite off your finger, if you aren't careful. And I met a "black bear" (Schwarzbär).

There's "portage" (Kanutransport über Land), a very common word in Canada, where everybody seems to own a canoe. The Canadian English pronunciation is (surprise) like the French one.

It's always important to understand what you are going to eat. Sometimes you are in for surprise. "Beavertail" sounds like meat, but it's (very) sweet and definitely not low fat. In a supermarket we discovered that "Pogo" is the Canadian equivalent to the American "corndog".

Otherwise Canadian English is an unpredictable mix of British and American English. It's "fries" (Pommes frites) everywhere, but when you add fish it's "fish & chips". I often heard and read "tap" and not "faucet", but also "elevator" and not "lift". The pronunciation is clearly American, the spelling often British as in "centre".

New page about the last lessons in summer 2017 with photos (get your password from me!)

Photos of our last school trip to England in March 2018 in the English section  (password!)